Island paradises, reggae buses and emergency operations - this post has got the lot!

So here we are again folks, and sorry it's been so long!

As some of you know, it's been an eventful 6 weeks or so, and so we have a lot to catch up on, so here goes...

We touched (bumped!) down in Fiji to be welcomed by extreme humidity and torrential rain - definitely not what we'd signed up for!

Happily, we awoke the following morning to be greeted by glorious hot sunshine, so like good English citizens we ran down the beach for maximum sun exposure time - however we're sensible when it comes to the factor 30, so worry not!

After a few days relaxing on New Town Beach, we decided on a 7-day trip around the Yasawa Islands -deciding to stay on 3 of them for 2 nights apiece.

On the first day, after a slight soaking on the Yasawa Flyer (a big yellow catamaran which takes you close to your island of choice before a small water-taxi picks you up), we got an even bigger soaking as we approached our first resort - Safe Landing on the island of Nacula, one of the furthest north from the mainland. 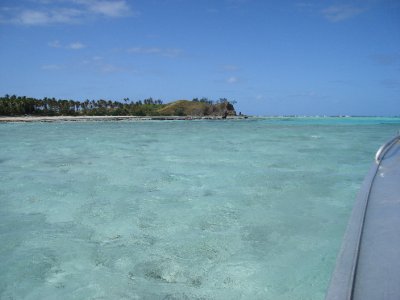 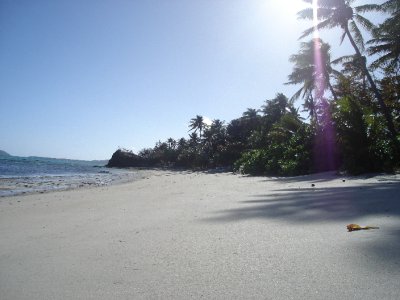 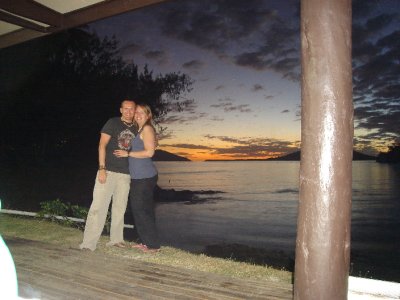 As you can see, these islands really are about as close to paradise as you can get, and our bure was situated right on the beach, complete with a handy hammock attached to a couple of coconut trees for good measure!

One of the highlights was walking around the bay before sunset to sample afternoon tea Fiji-style - check out the local Starbucks: 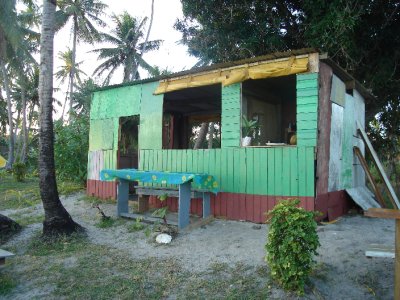 As we sipped our tea, we watched the school bus dropping the kids off - they leave for school on Monday morning and come back on Friday afternoon! 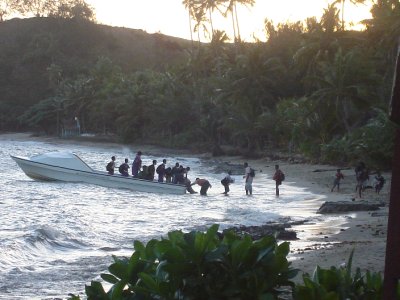 On Sunday morning, we were invited to the village church to join the locals in their weekly prayers. Needless to say we were somewhat taken aback when a pumping house beat erupted from the LOUD pa system, and the preacher started to 'Dad dance' around the open-air church while the congregation ran freely underneath the coconut tress, also getting their groove on! Of course, we stood there like stiffs at the front, clapping politely and looking slightly bewildered!
We all agreed that if the C of E introduced raving into their Sunday sermons, we'd all be on board!!

The 2nd resort we visited was the aptly named 'White Sandy Beach' on Naviti Island.
The snorkelling here was amazing - you only needed to swim 30 metres out before comingacross a deep coral shelf with the most incredible array of multi-coloured fish of all shapes and sizes, as well as the coral itself which was like something off the BBC's Blue Planet!

At this point, we have to mention the lovely cold outdoor shower that came with our bure - we soon realised that middle of the afternoon was the best time to use this - you didn't want any shade or cool breeze to make matters any worse! 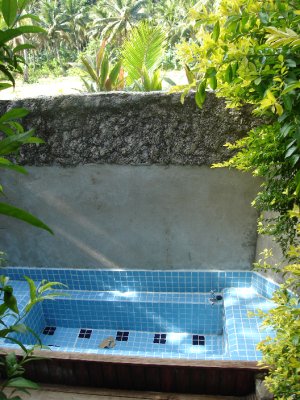 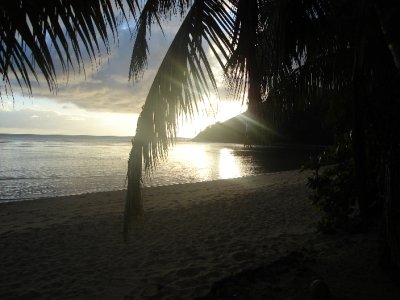 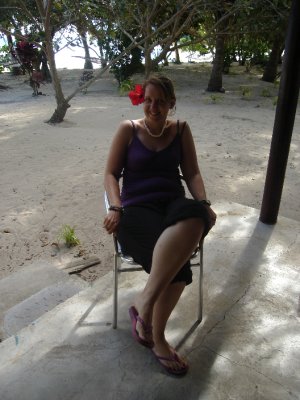 Our third and final resort was Wayalailai on the Waya Island. Here, all the profits from the resort were channelled back into the village, providing better homes and scholarships for the children.

Here, we went on a rather scary and unsafe rock walk (Lucy declined the opportunity to cross a narrow ridge with huge drops on either side, after watching our guide John literally drag a nervous Canadian girl across by her arm..!): 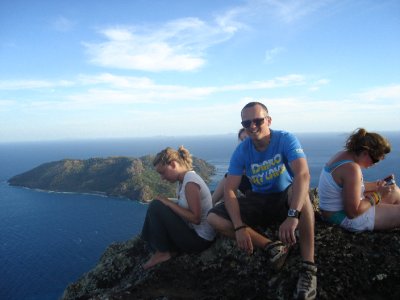 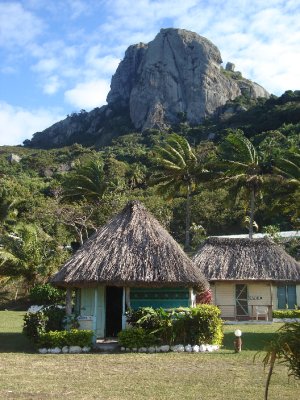 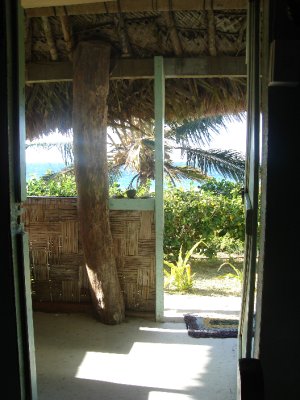 We also sampled a Kava ceremony (where you clap and smile even though you've just drunk a foul tasting gritty pummelled root!) and did some more snorkelling. Lucy also learnt how to weave on the beach with some of the older women from the village, and made herself a bracelet and ring.

We were quite dejected when we had to leave the Yasawa Islands, but all good things must come to an end! We sailed back into Denarau port on the mainland just as the sun was setting over another gorgeous day in Fiji: 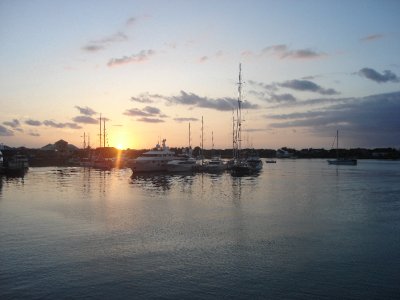 We then decided to visit the Coral Coast on the south of the main island. To get there, we negotiated 2 local buses, both of which had very basic suspension, deafening engines and erratic drivers who saw traffic ahead as a challenge to overtake on corners and scare the living daylights out of us! Bizzarely, one of the buses was fitted with a nightclub sound-system that any boy racer would be proud of! When we sat off, a UB40 track blasted out which, as if this wasn't bizzare enough, kept skipping and repeating over and over as we hit many a pot-hole along the way. While Lucy and I sat there laughing at this farce, the Fijian passengers sat there looking stoney-faced and bored, which added to the comical scene before us!

Having made it, we spent a couple of days at the Beach House resort, where Richard had a dose of 'Nadi Belly' for a couple of days but nothing too serious. We then moved to the unexpected luxury of the Bedarra Beach Resort, where we were treated to a huge air-conditioned en-suite room, welcome drinks, room service and evening meals on a terrace over-looking the sea. 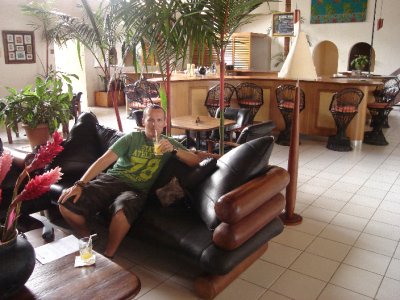 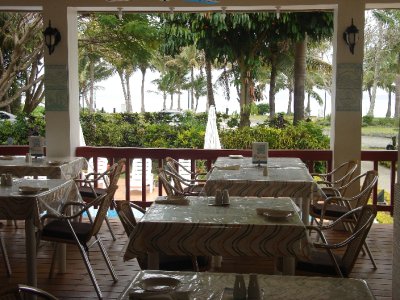 Bliss, or it should have been! Unfortunately, it was then Lucy's turn to come down with an illness, which lasted for more than a couple of days. We eventually visited a doctor in Sigatoka, who prescribed her some anti-biotics and lots of plain food!

This seemed to do the trick and we spent a final couple of days in Fiji back in New Town Beach again, nice and handy for the airport up the road. On our final night, we had a meal with an Irish couple we'd met on the Yasawa Islands before once more cramming all our worldly possessions into our rucksacks and getting an early night for the flight in the morning.

After an uneventful flight, we landed in a sunny and warm Sydney and caught a cab to our hostel on Coogee Beach, round the bay from Bondi. Unfortunately, Lucy was starting to feel worse again, and the next day was spent frustratingly trying to navigate the city and get to grips with the local transport system! We also found another hostel in Bondi, as our place in Coogee left a lot to be desired.

By the evening, Lucy was feeling worse still and so we booked her an appointment at a local medical centre for the next morning. On examination, Lucy was advised to go immediately to the A&E department of the hospital, as there seemed to be a serious problem in her abdominal area.

Within a couple of hours, poor Lucy was on a drip, pumped full of morphine and being told that she would be staying on ward for some time while they diagnosed the problem. Meanwhile, Richard was catching cabs, packing bags, moving everything to the new hostel in Bondi, putting together overnight bags for Lucy and speaking to her family while trying to catch a bite to eat!!

The next day, Lucy was informed that she had gall stones and that her inflamed gall bladder would need to be removed. Surgery was scheduled for 2 days later and Lucy bravely looked on the bright side. At least we weren't in Fiji anymore or in a remote part of Cambodia and her folks would see her good as new in a couple of weeks! 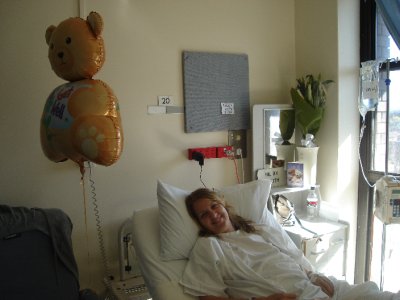 The operation went well, but took a lot longer than expected, so a concerned Richard rushed out from the TV room as Lucy was wheeled back into her room that evening.
After a brief call home to reassure the folks that all went well, it was a case of resting up and letting time and nature do their thing.
3 days later, Lucy was allowed out of hospital and gingerly arrived at the hostel in Bondi, who'd been very good to us - arranging lifts, giving us half-price rent, room upgrades, clean bedding and towels everyday. They even gave us a vase for Lucy's huge bunches of flowers!

The last week or so, which brings us up to date, has mostly been spent relaxing on Bondi Beach and looking for a suitable car to drive the 4,000KM north up the east coast to Darwin. 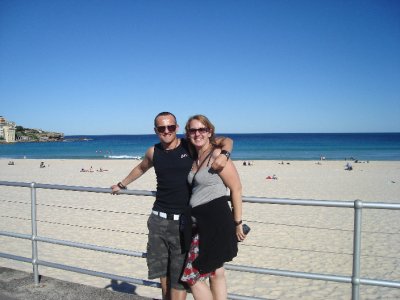 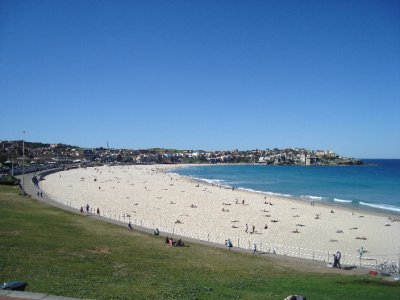 Happily, we found such a car today and are picking it up next week once it's been put through it's road-worthy tests. In the meantime, Gerry and Mavis arrive tomorrow, much to Lucy's excitement, and so we'll finally get to see the sights of Sydney that we've been putting off, such as the Sydney Opera House, harbour area, circular quay, Manly and so on.

We hope you're all well back home, do leave us a comment and keep it touch!